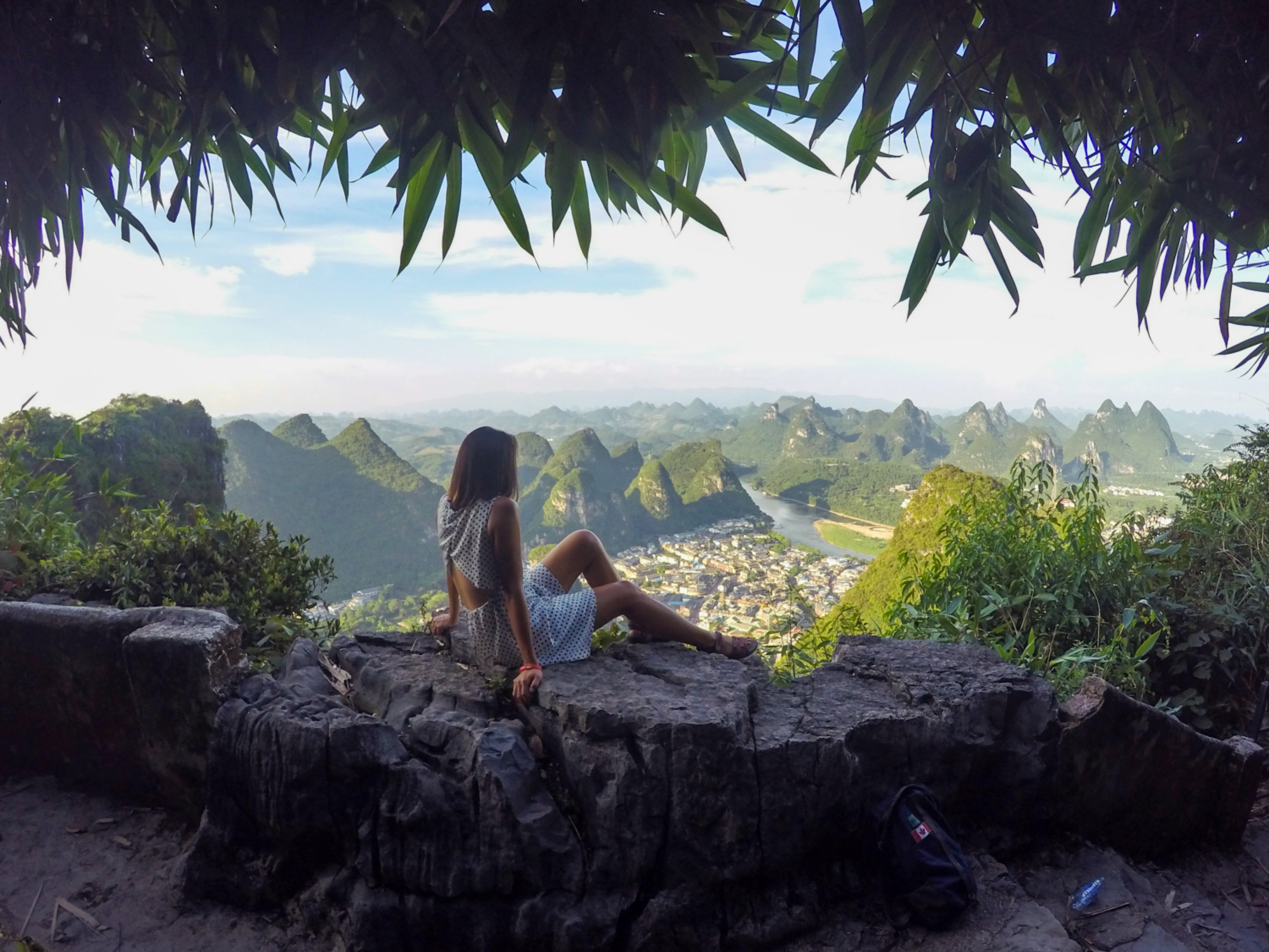 For our last two weeks in China, we decided to join a tour in order to maximize the amount of stuff we could see. We ended up going with The Dragon Trip, which specializes in backpacker trips that use public transit and local guides to reduce costs. We were in a group of 15-20 (people joined and left at different stops in the trip), consisting of both people on big round the world trips, and people on short holidays.

We met up with our tour group in Hong Kong. Our guide for this leg of the trip was Servet, who had the not-so-glamourous job of taking us up Victoria Peak on a rainy day, and then putting us on a series of trains and buses so we could reach Yangshuo by the end of the day.

After a very picturesque train ride through the karst mountains, we arrived in Yangshuo and met our second guide, Melinda. Yangshuo is one of China’s more popular backpacker towns, due to its small size and abundance of available outdoor activities.

The first day we walked around town, where there is a big pedestrian street with lots of international restaurants and souvenir shops. It leads to the Li river, where you can see the trademark karst mountains of the area.

The next day the whole group went of a bike ride though the countryside. The ride up the river was easy and catastrophe-free (I bring this up because the way back was not so much, but more on that soon), and the scenery was gorgeous. Further up the river we stopped for a bamboo raft ride. The ride was quite peaceful, once the guy paddling our raft figured out we were backpackers on a tour and not going to tip him any extra. There were a few bits where we went down a few rapids, but the two person rafts were pretty sturdy considering they were basically just some chairs on a bunch of bamboo tied together.

Afterwards, we got on our bikes for the ride back, only to discover that the guy who was supposed to bring our bikes downstream had seemingly just thrown them all in a pile in the back of a pickup truck and sped down a bumpy road, because about 50% of them were broken. Fortunately Melinda and the not nearly apologetic enough truck driver managed to bang most of them back into semi-working order (though who knows how they explained all the dents to the bike rental place). We headed off, and all was well for a while before Steven*, our of our fellow tour group members was almost sandwiched between a car and a moped. We did not know yet, but this would be one of many Steven-related incidents. He had just joined the group that day, and it’s widely speculated that it’s because he missed the group meeting in Hong Kong.

Anyways, we stopped to check if everything was okay and got left behind by the first half of the group. Then the brakes on one of the bikes broke. Chris tried to use his Toys ‘R’ Us expertise to fix it, but it was a bit of a lost cause without any tools. Melinda and the rest of the group eventually realized half of us were missing, so they stopped on the edge of town and we rejoined them. Melinda tried to get the broken bike fixed by a couple roadside mechanics we passed, but unfortunately “Chinese men are not helpful” (her words) so she ended up struggling back to town.

After we had recovered from the bike ride, we went out to West street for the evening, which was about a hundred times more crowded than it had been in the day time. Seems like Yangshuo is a bit of a nightlife town as well.

The next day, a bunch of us opted to try deep water soloing, which is basically rock climbing over water, without ropes. Ideally you climb up the side of a small cliff and jump back in to the water. The chance to go swimming for the first time was actually one of the main reasons we decided to give it a try. We first stopped at our guide’s house to get equipment, and he had an enormous amazing dog. While the rest of us took a bus to the climbing spot, Steven stayed behind and was driven on the guide’s scooter, as he was having some poorly-timed gastrointestinal distress.

Anyways, once at the river we all swam out to the cliffs on the other side, where we quickly found out that the learning curve for this sport is pretty steep. The first route was quite easy, and we both made it up on the first try. I think that working up the nerve to cliff jump off the top was more challenging.

Of course the next couple routes, though they looked so easy when our guide demonstrated them for us, were actually super hard. For people with no upper body strength like me anyways. There was some comedy mid-morning when Steven made it halfway up the cliffside, then realized he was afraid of heights and was too scared to go further up or climb down.

Afterwards we went back to town and made a great discovery: Guilin Rice Noodles. They are basically rice noddles that come with soup and a bunch of different toppings, then you mix them all together and it’s delicious.

That afternoon the whole group opted to climb up Moon Hill. Moon Hill is a small mountain with a big hole in it, so it looks like the moon rising over the trees. The hike was easy (comparatively, since the last hike we had been on was Mount Tai), and we made it up in good time.

Afterwards we went to Water Cave. The cave is lit up in a rainbow of neon lights (like they seem to like to do over here in Asia in general), and underground there is a mud bath and a hot spring.

Steven caused a few headaches for Melinda at at the cave, first by deciding at the last minute he needed a locker to hold all his stuff. Melinda offered to hold onto the key for him, and he refused, only to promptly dive into the mud bath and lose it. Then, after getting the lock cut off and driving halfway home, he realized he was still wearing the flip flops from the cave and had forgotten his own shoes.

The next morning we had planned to go kayaking, but turns out the government had decided that wasn’t allowed anymore. Instead, a few of us went to the nearby village of Fuli, which specializes in fan painting. Chris was actually super excited about this.

In the village we looked at a bunch of fans, and then a couple of master fan makers showed us how they are made. They, we each got to paint one ourselves! I’m not sure our skills were quite up to par, but we tried. Turns out flowers and bamboo are deceptively hard to paint. While there we also bought some nice fancy ones as gifts.

That afternoon Chris decided he was too tuckered out from fan making to go out, but I decided to climb up the big Antenna Hill behind out hostel to see the sunset. There were a lot more steps than I anticipated, but the view over the karst mountains was pretty crazy.

The next morning Chris was still refusing to climb up hills, so I went climbed up to the temple in People’s Park to see the sunrise without him. The park is cool at dawn because all the hardcore old men are out doing Tai Chi.

Then, it was onto Chengdu!

* Not his real name